“To adopt the new technologies: A current opportunity.”

The Triple Technology, the starting point and the operative continuity of the CAAM.

Biotechnology is somehow an ancient science. The term may have different meanings, but it always summarizes the processes that mankind has created, using structures or biological systems, in order to use them to live better.
To this definition is not exempt biotechnology applied to allergens. The biochemical methods, more and more accurate and refined, enable to know the sequence and structure of proteins, as expressed (produced) in their natural tissues. Molecular biology, with the introduction of recombinant DNA technology, has made possible the production of allergenic molecules cloned in laboratory instead. These two approaches have allowed to know better and to make available thousands of allergenic molecules in the last 30 years. As of now the Allergome database, which classifies both allergenic sources and molecules, collects info on approximately 3,000 molecular allergens, derived from more than 2,500 allergenic sources. 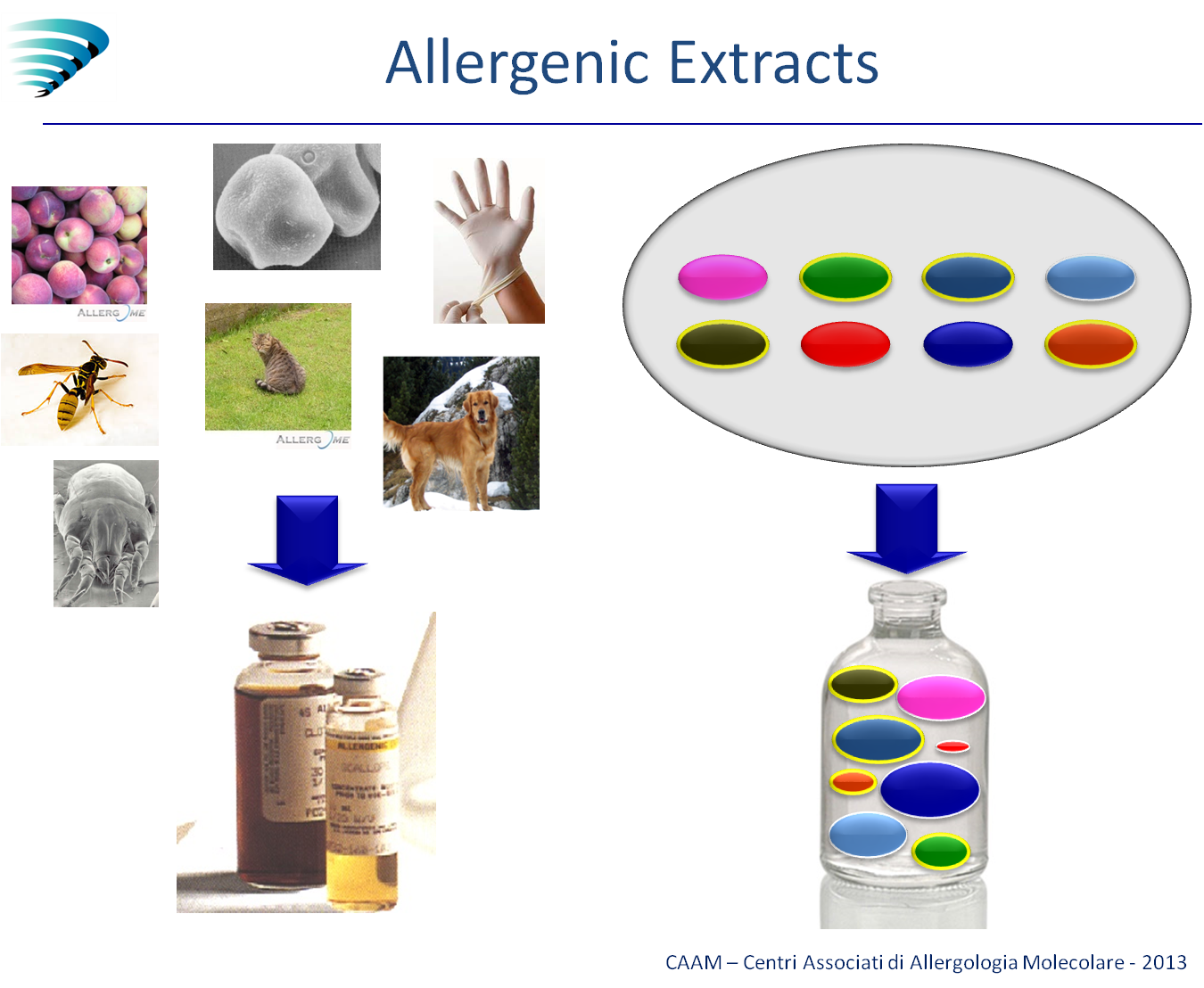 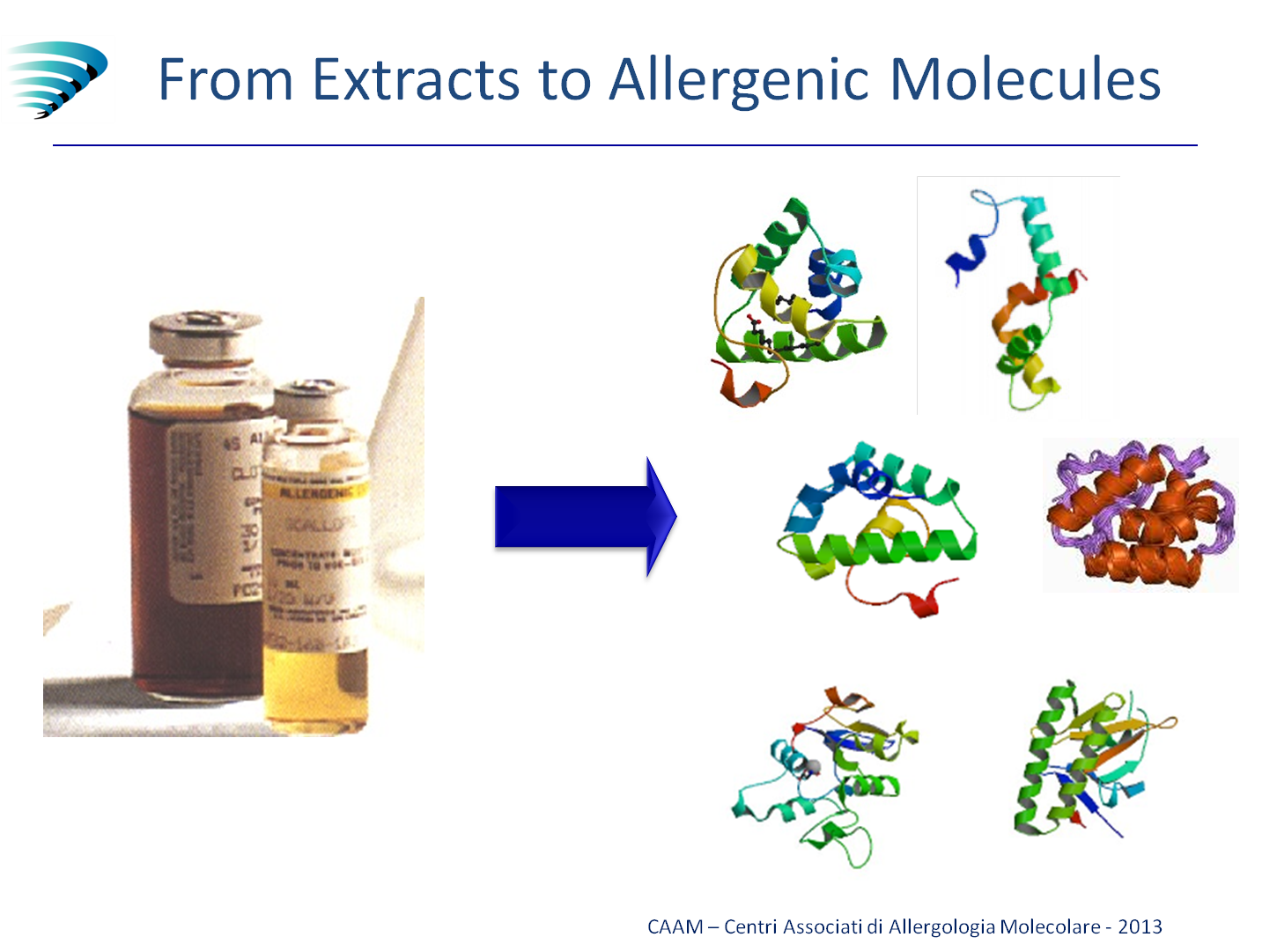 This increase in knowledge has marked a historical step toward the science of allergy, because it allowed to accurately assessing the interactions between the immune system and allergenic structures. This was not possible before with the use of allergen extracts. The latter, still used as a technical step required to obtain information about allergenic molecules, enable to measure simultaneously the interaction between IgE and several allergenic proteins. 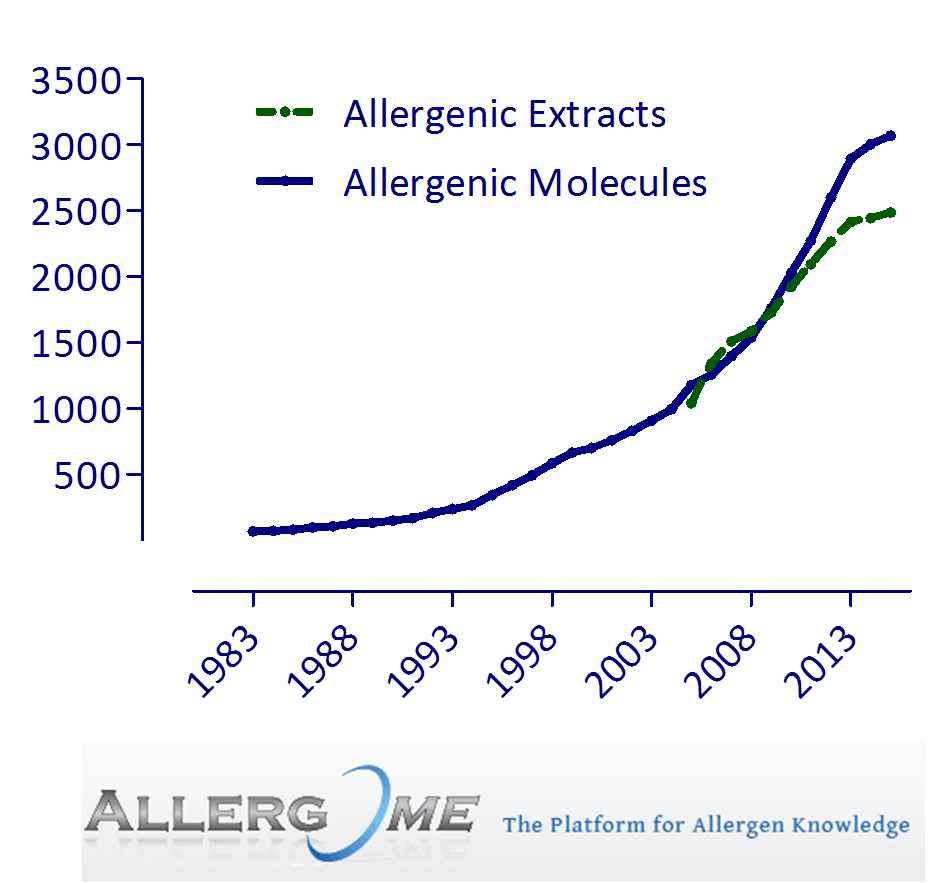 For twenty years CAAM researchers have operated in collaboration with laboratories of biochemistry and molecular biology toward the identification of a growing number of allergenic molecules, and their biochemical and immunological characterization, but much more to the definition of the allergenic molecule role in the clinical history of the IgE-mediated allergic diseases. The use of micro-technologies, requiring minimal amounts of allergenic preparations, allowed to indifferently operate with highly purified natural molecules, cloned molecules or carefully characterized extracts, allowing moreover the benchmarking of the quality of these products in the laboratory. The first goal achieved has been the development of modern diagnostic systems for allergy. The final biotechnology target will be the production of allergenic molecules for allergy therapy.

Microtechnology and nanotechnology represent the second technological basic tool for CAAM research and health care activities. Being the former available for about 20 years and the latter more recently, they have been first used for biological research and subsequently for clinical applications in medicine, as in the case of allergy diagnosis.

The early microarrays were obtained with the deposition of micro amount of allergenic preparations, on prepared surfaces, by the use of a robotic spotter. Microarray's spot have a size between 50 and 200 micrometers (a micrometer = 0.001 mm). Today is possible to produce microarrays with thousands of spots. Each spot in the microarray has a precise position. In addition to microtechnologies on flat surfaces, there are virtual microarrays on fluorescent microbeads, which allow to obtain similar results. The microbead dimension, equal to 5-7 micrometers (diameter), allowed to understand that is possible to develop diagnostic tests using elements having dimensions below of microarray spots. The increasing availability to operate with materials and tools within nanodimensions (a nanometer = 0.000 001 mm) makes more interesting and powerful its application to medical diagnosis, mainly to allergy diagnosis.

The logical consequences of microtechnologies are three. The first consequence: due to the micro and nano sizes of these tools it has been possible to use tiny quantities of allergenic preparations. It is estimated that in a microarray's spot 100 picograms (a picogram = 0.000 000 001 mg) of purified allergenic proteins are immobilized, and that in nanodimensions 100-1000 fold less are required. The second consequence: the immobilization on a micro or a nanoarray of an increasing number of allergenic preparations, exploiting also the possibility to immobilize the similar preparations several times to make the allergy diagnostic test more robust and comprehensive. The third consequence: the production of increasing amounts, impossible before, of diagnostic and scientific data. These extremely structured data, as a consequence of the high throughput and high-efficiency produced by micro and nanotechnology-based systems do represent an added value of the modern allergy diagnostics.

The increasing processing power of computers, the progressive reduction of their size, increasing their storage capacity, creating global networks of data exchange via Internet and the proliferation of communication means, now virtually with no physical limits, have founded the new interaction between all of us and changed lifestyles globally. The transfer of ICT in biomedicine has been progressive, initially focusing only on structured collection of biological data (databases) and gradually, though very slowly, the clinical data. In 2005 we have started the development of new systems interconnection and data collection, centering on the Allergome platform the possibility of development of a network dedicated to data collection and management in allergy. 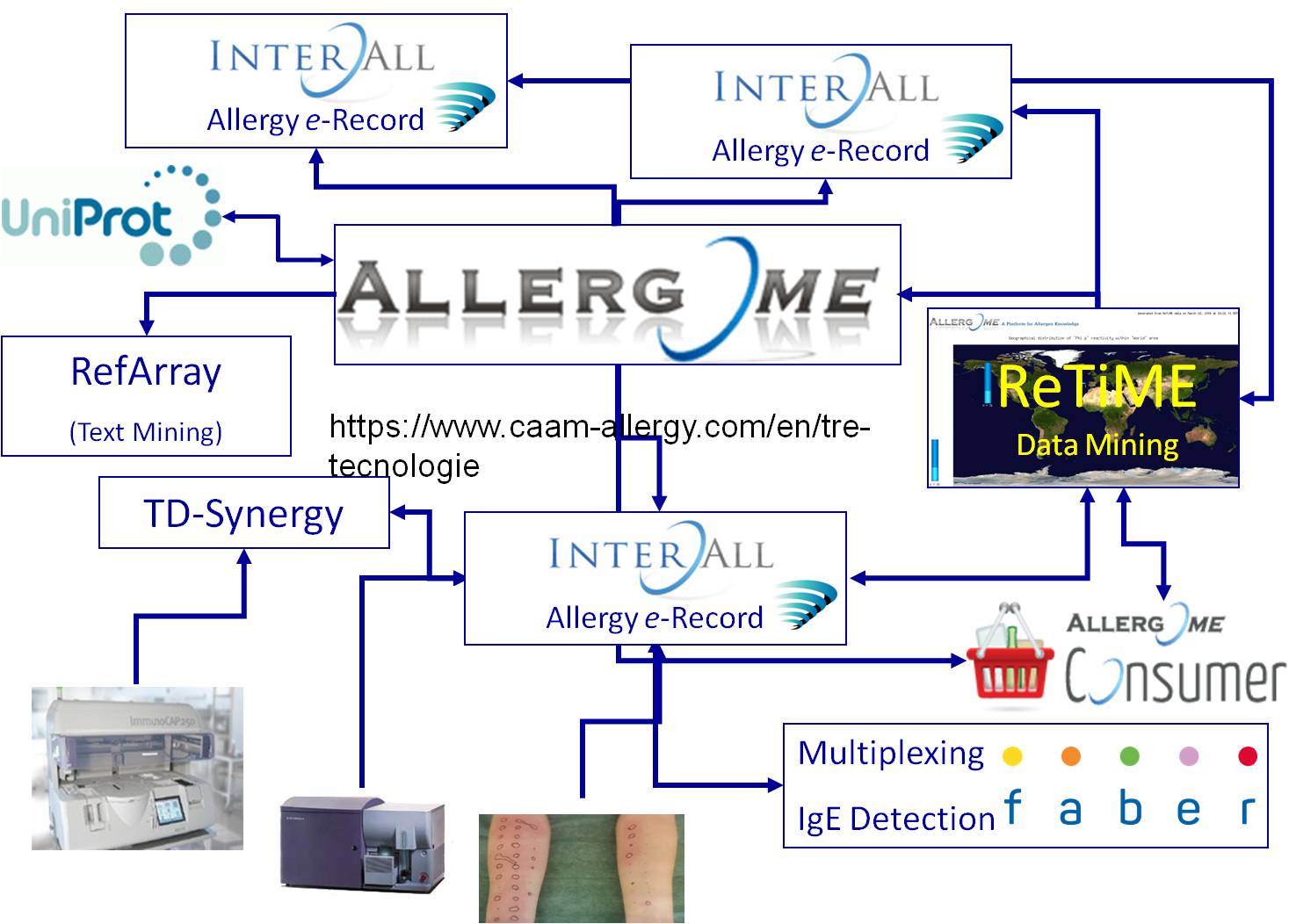 The CAAM, in partnership with Allergy Data Laboratories, has therefore created and developed the first real network of biological and clinical data in allergy, giving a concrete answer to the need to manage large amounts of structured diagnostic data, without being overwhelmed by the high productive efficiency of systems in micro and nanotechnology.

3 Combined technologies for the diagnosis of allergy

The paths of development, acquisition and use of the three technologies are surprisingly parallel. Recent decades have thus laid the background for the development of new technological systems to be applied in biomedicine and thus also in allergy. It is 1999 when Dr. Mari for the first time heard from Prof. Valenta about the possibility of developing a "test very small, the size of your thumbnail, but that contains dozens of molecular tests, and uses small amounts of each allergen". Prof. Valenta asked him to contribute with Jun o 4, the pan-allergen previously cloned in Rome thanks also to the clinical contribution of Dr. Mari, then used for the first molecular microarray for the determination of IgE. The latter became the subject of a scientific publication in 2002 where the allergy diagnostics in microtechnology using allergenic molecules was reported for the first time.

In 2003, Dr. Mari came into contact for the first time with Reinhard Hiller, one of the three inventors of what would be called the ISAC test later on. Together they tried to figure out if the test for IgE in microtechnology, which was only given experimental evidence, could be turned into a new diagnostic system for routine allergy. Later, in Vienna, Dr. Mari knew the other two inventors, Manfred Müller and Christian Harwanegg. It was with them, assisted by Sabine Hutter, all employed in various positions in the VBC-Genomics company in Vienna, which began the path of development of the test as ISAC is available today. In 2004-2005 experimental release of the test were created, increasing the initial 29 allergenic preparations to 51, 71, 73, and then 74 allergenic molecules. When ISAC reached the number of 76 allergens it was eligible at the beginning of the diagnostic routine at the CAM. With constant interaction between the Viennese company and the current CAAM experts, ISAC has continued to grow, rising to 79, 85, 89, and 103 allergenic molecules. A growing number of these have been produced in the CNR laboratory of Prof. Ciardiello in Naples. The phase of clinical validation of all versions has been always performed by current CAAM experts.

With the increased number of allergens available on ISAC test, the need to manage suitable results also increased. Since 2005 the ADL electronic record InterAll has been developed, becoming fully active in 2008 and completely interfaced to the ISAC system since early 2009. InterAll is an external module of the Allergome platform exchanging data in real time. Allergome provides it the nomenclature and the exact coding of allergens, as well as many of their features available on the platform itself. InterAll is now daily used for networking by CAAM specialists, and its user interface is developed in 6 languages (French, English, German, Italian, Portuguese, Spanish) having the possibility to produce an allergy testing report in the same languages automatically.

ISAC was then acquired by the largest company of allergy diagnostics worldwide, which led him in 2011 to the current 112 version. The CAAM researchers, in collaboration with the center in Vienna, developed three experimental versions of ISAC called 96, 131, 167. Each of these has been useful for testing new allergenic molecules that are identified and produced by IBBR-CNR and other research centers, and collected by CAAM researchers. Conceptually different, these experimental versions of the microtechnology test have allowed to explore new aspects and applications. Among the many, with ISAC 96 both IgE and IgG detection have been performed at the same time, allowing for the first time in a single test in the diagnosis of allergic disease and autoimmune one. The expertise acquired by the CAAM experts has been then invested in the development of a new type of microarray based on microbeads. The test successfully developed and named Allergen Beads Assay (ABA) has completely replaced other historical methods in research labs as the ELISA, and it has been used for the characterization of new allergenic molecules.

The developments introduced by these 3 technologies have not stopped. While fully integrated each other and used in routine diagnostic and allergy research only by CAAM specialists, they offered the possibility of further progress in their use, continuing to build up our knowledge.

It could be assumed that many new aspects of the three technologies could be used in biomedicine, for the benefit of research, diagnosis and treatment of allergic diseases.

The ongoing process to make the allergy field very modern leads in 2016 to the release of the first version of the FABER testing system which once again takes advantage of the most advanced technologies. The development and release of the FABER system based on nano-technology allows to increase test comprehensiveness, precision, sensitivity but mainly the number of allergen preparations to be used to perform specific IgE detection, without increasing the overall test needs, including costs. 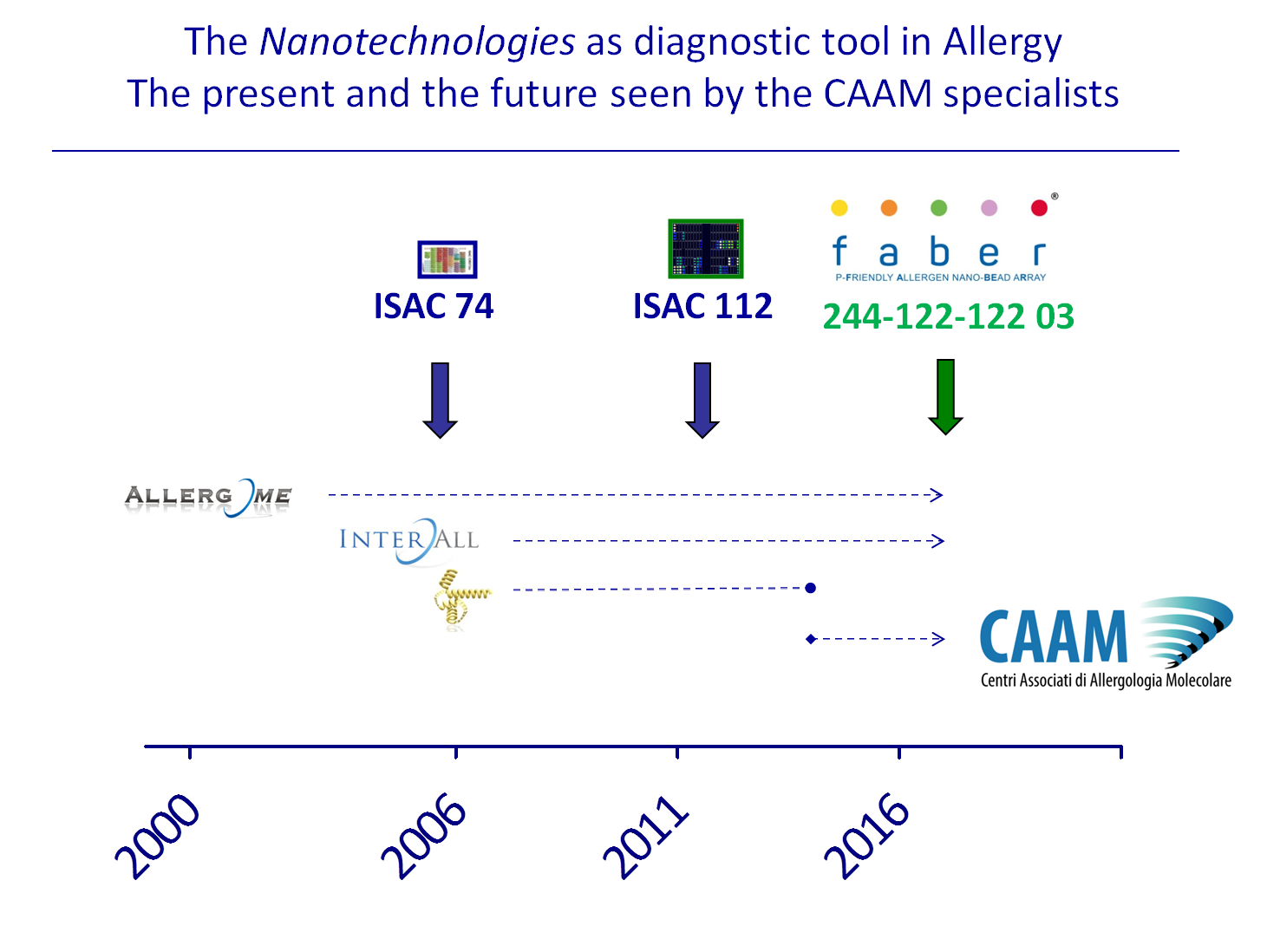